It was a beautiful Fall day; still warm. The weather hadn't changed for the worse yet. I took lunch about 2:00 in the afternoon, and my wife called me. She wanted me to call Rob. Rob is a friend who lives not too far from us on Long Island, but works in NYC. I asked her why, and she said to give him a call. I didn't have Rob's work phone number, but my wife had gotten it from Rob's wife.

I gave Rob a call when I returned from lunch. He asked what I was up to, and we went through the usual complaints about work and how hectic things were. He asked if I was busy “tonight”, and I didn't think I was, and asked “why?”

Rob, a Yankee fan, tweaked me a little bit; “I don't know if you're interested, but I have an extra ticket to tonight's Mets game. Want to go?”

I told him I would have to check with my wife, and I would call him back. I called my wife, and she was in on it, and I told here I was going after I got her approval.

Rob was going to have to meet me at Shea, and figured he would be there about 7:00. He had to catch a train from NYC. No problem. I would just hop in my car, and drive in.

When I got to my favorite parking area, the train yard across the street from Gate C, I started to laugh when I had to pay $20 to park, when two months earlier when I went to a game it was only $13.

I got to the meeting spot and was having a chuckle looking at fans dressed in their orange and blue. People in the weirdest attire. I often wondered where these people were during the 162 game regular season.

Rob and some work associates were running late, and didn't meet me until about 7:10 outside the gate. When we got to our seats in the Mezzanine level half way down the RF line, St. Louis already had runners on in the top of the first. 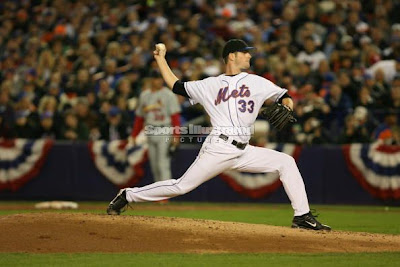 John Maine was on the mound for the Mets, and Maine, who at that point in his career was quite good, did a nice job of getting out of the first inning against St. Louis.

In the first inning, the Cards had runners on first and third when we arrived at our seats. There was one out. Maine struck out Jim Edmunds for the second out, before plunking Juan Encarnacion to load the bases. Maine got out of the inning by forcing Scott Rolen to fly out.

It was a scary beginning considering the Mets were down in this best of seven series 3 games to 2.

In the Mets half of the first, the Mets showed they were not going to play dead; Jose Reyes led off with a blast to RF, which we were in perfect position to see. Having been attending Mets games since 1975, I have never felt the stadium shake the way it did. It felt like the stadium, named after the late William Shea, was going to collapse. Then the chants of Jose, Jose, Jose, Jose...Jose, Jose erupted.

Although Rob is a Yankee fan, he does root for the Mets. He works for a sporting goods company, and the better NY does, the better it is for him.

We were having a great time, and when Shawn Green had an RBI in the fourth giving the Mets a 2-0 lead, I was feeling a “little” better, but not yet confident.

In the seventh, Paul LoDuca knocked in two more runs increasing the Met lead to 4-0.

The win looked inevitable when Billy Wagner took the mound in the ninth. Wagner was scary; nothing was ever easy. Billy The Cardiac Arrest Kid, didn't disappoint. He gave up two runs when So Taguchi knocked in two runs with a double. Finally Wagner put an end to this night by getting David Eckstein, who would become the World Series MVP, to ground out to second.

The place erupted. I just stood and looked; 56 thousand plus cheering and stamping their feet. Rob told me if the Mets won tomorrow, we would be going to a World Series game. I told him not to get too far ahead; there was still one more game to play.

Exiting the stadium, people were still cheering and screaming and chanting. Having been to a boatload of games over the preceding 30 years, I had never been to a play-off game before nor had I ever seen the stadium and it's fans like that. I had been to Gary Carter's first game as a Met, Darryl Strawberry's first game at Shea, sat in the K Korner, even saw Juan Samuel hit a HR as a Met. Never before, nor since, had I ever witnessed anything like this.

I gave Rob a ride home, and the entire trip we just talked about the game, and how cool it was to go to the game. Not only was it cool to go to a play-off game, but how it spontaneously occurred. You can't make this stuff up.

I may get to another Mets play-off game before I leave this earth, but none will have the energy this game had. Elimination on the line, a rookie on the mound, and an exciting game all around. It didn't get any better than that.

To reach us here at 24 hours for comments or questions

Our tribute to Shea Stadium and the New Citi Field

Where Are They Now?

Behind The Bag, It Gets Through Buckner...Here Comes Knight, And The Mets Win It...

Friends of 24 Hours From Suicide...A Day In The Life of a Met Fan (a.k.a. Long Island Met Fan)